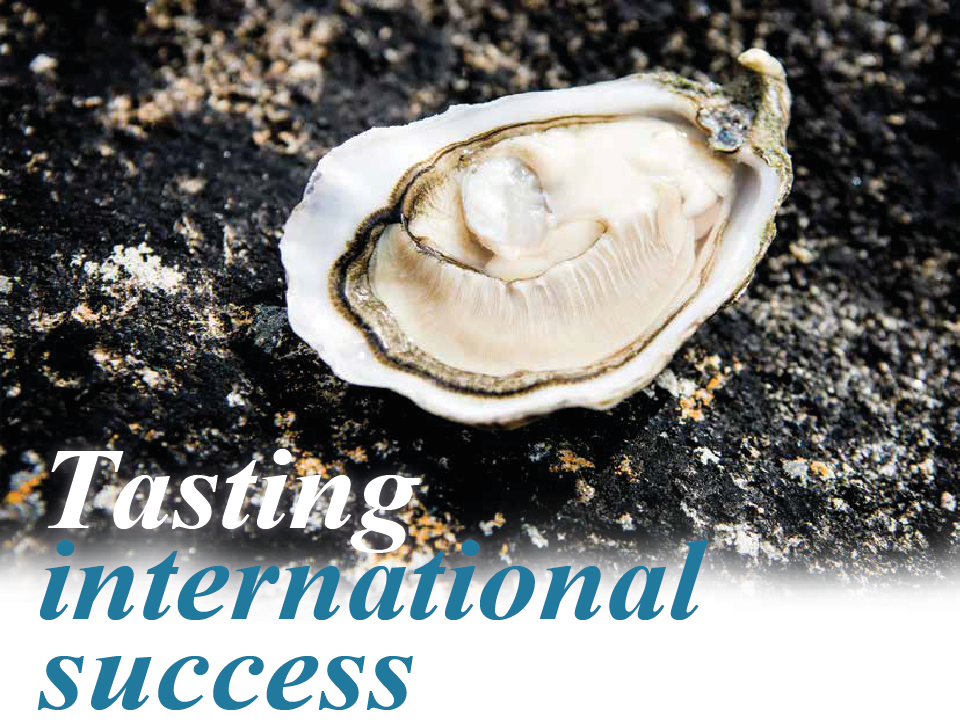 Edward Gallagher, director, irish Premium Oysters says his gigas oysters, raised in class-A bays on the northwest coast of Ireland, are very high quality and have a unique taste, which is delivering repeat customers

“Our oysters are mainly bought by consumers for the flavours. We have a river running adjacent to the oyster farm and it’s peaty water, which gives it a very unique taste. That is our biggest selling point. Some oysters have big meat, some oysters have beautiful shells, ours have a very unique taste. We don’t have extraordinarily large meat but you get a unique aftertaste. The consumers keep asking for our products. It’s the consumers who decide, rather than wholesalers. It ends up in four and five-star hotels, top-end restaurants.”

All product from Irish Premium Oysters is destined for export, with 99 per cent going to Asia.

“I am very unusual as an oyster farmer in Europe to say that I sell nothing in Europe, because the average oyster farm sells 90 per cent in Europe. We started exporting to Hong Kong and Taiwan in early 2000, and we have loyal customers in Hong Kong. From there we have moved to Malaysia, Japan, Dubai, Singapore, Thailand and China.”

Edward explains that product is packed twice a week, on Monday and Friday, arriving in Asia two days later.

“We own our own lorries so it is a sealed unit and are recognised as ‘known consigners’, which means our oysters go directly onto the plane. That cuts out a bit of time.”

Edward says Irish Premium Oysters is growing organically at 10-15 per cent per annum and is now exploring opportunities closer to home in Europe.

“That way we won’t be entirely reliant on Asia. We are looking at Italy because I have exported there in the past. There is always going to be a space for our product because it has a very unique taste. That is our biggest selling point.”

Edward prefers to work with one or two customers in each of his target markets.

To maintain quality in production, Edward explains that the cold waters in the Donegal Bay slow down growth and allow the flavours to mature.

“We can do it quite naturally because in Donegal the water temperature is roughly 2OC colder than in the south of Ireland. So, we slow down the growth, which increases shelf life and the hardiness of the shell. It also increases the meat content.”

“We were one of the first in Ireland to put in an automatic grader back in 2007. I upgraded it in 2010 and upgraded it again last year.”

As a member of Bord Bia’s (the Irish Food Board) Origin Green programme the company is looking at ways to drive improvements, including packaging, electricity and water consumption. Edward believes this is an important element in sharing the industry’s story internationally.

Irish Premium Oysters Ltd produces an Oyster which is unique to Traigheanna Bay. These unique oysters continue to grow in popularity internationally. Oysters are high in protein and low in fat and are highly nutritious, rich in zinc which is vital for a healthy immune system and are known as an aphrodisiac food which does have some truth to it, as their high zinc content is good for a healthy endocrine (hormone system) and libido. 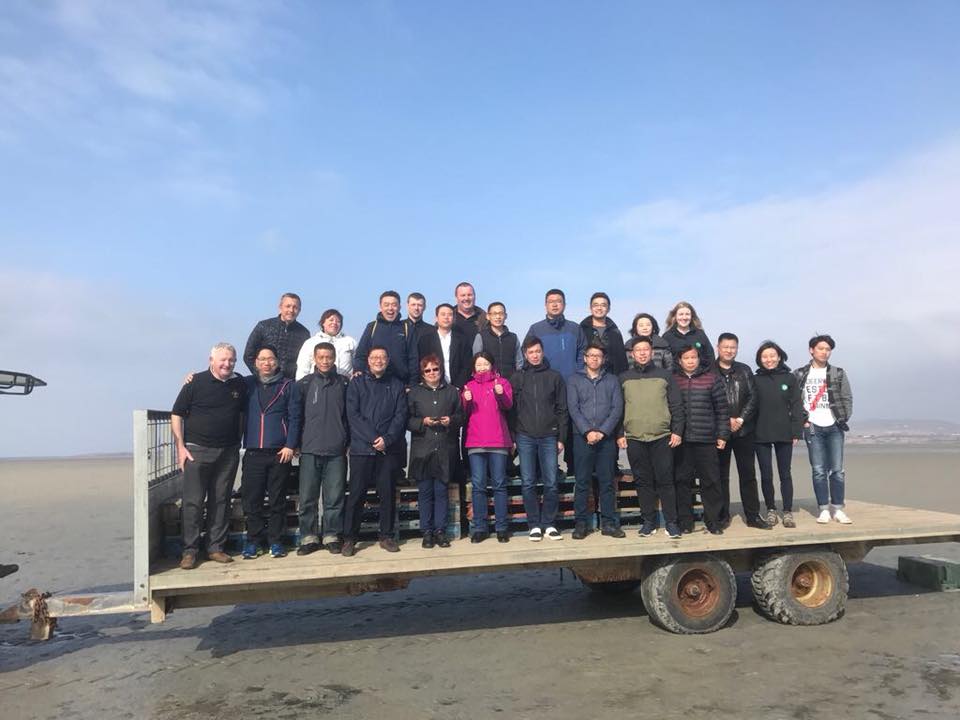 Oysters were originally transported wrapped in seaweed and sold by the barrel-full. Today all, oysters are graded and sold by category of weight. The quality of oysters are rigorously scrutinised by national and international buyers for conformance to weight, shell appearance and cleanliness.

Traditionally oyster farmers have weighed per hand or on weighing scales, a painstaking task involving considerable cost in terms of manpower, time and the risk of error. Oysters were washed separately frequently imprecisely in a ‘DIY’ manner. In the last decade Ireland’s largest farmers recognised the cost-saving benefits of an integrated and synchronised washing and grading system allowing for greater inspection and scrutiny before dispatch.

Several Irish farmers have recently chosen to renew their equipment and take advantage of recent technological advances. The Marine Times have learned of one such installation that has taken place at Irish Premium Oysters in Donegal. Choosing advanced technology introduced in the preceding two years by the Hardouin Company from the Vendee region of France, Irish Premium Oysters opted for the grading machine and associated equipment with the greatest count per hour capacity, reasoning that any current excess capacity could be made available in the future. This new machinery was then integrated and synchronised with a pre-existing washer system.

Edward Gallagher, Managing Director of Irish Premium Oysters says “We took a strategic decision, and opted for a large capital investment, including modernising our machinery. Mechanization will achieve a higher production rate with the same amount of labour; this will allow me to spend more time doing the intensive management that results in premium grade oysters. In oyster production, the more often the oysters are sorted, the higher the quality. Grading allows for the removal of dead oysters and the checking of oyster health. By keeping similar size oysters together inter-oyster competition is reduced.”

Irish premium Oyster chooses Hardouin grading machines when they decided to renew their grading machines. Hardouin, a French company, is situated in the major oyster producing area in the Vendee and is the leading manufacturer of oyster grading machinery in France with over 300 in operation. With many farms in France being small family affairs the capacity of grading machinery is varied and ranges from maximum weighting capacity of 6000 an hour (small manual turnstile) to the largest available capacity of 19,000 (22 cup). The option of linear grading lines is also available. Different options are available in terms of washers and baggers. The company also proposes machinery for the mussel industry. Using the latest electronic equipment, the major innovation to the latest generation of Hardouin grading machines is its motorised cup system which increases speed, efficiency and long-term reliability. This innovation together with a remote maintenance capacity has given the company a major impetus to export. With a growing presence in Canada, the UK and the Netherlands the company now has six such graders in operation in Ireland along with other machinery such as washers and baggers.

Operating Hardouin grading machines: In brief terms the grader is fed post-washing by a synchronised feeding system that places a single oyster in each cup of the circular grader where it is weighed and directed to one of 6 pre-programmed weights exists. A control box (in effect a computer) allows for maximum flexibility whether in terms of synchronised speed control, pre-programming of grader exits or count (bags/oysters/weight). Having found the speed associated with the 22-cup grader (approx. 19,000 weightings/hour at full capacity) excessive, for current production, the speed of the machine was subsequently reduced to a more manageable 15,000 weightings an hour with the option of increasing capacity/speed in the future.

A requirement for Irish Premium Oysters was the annual maintenance and service contract with a commitment for a Hardouin technician to be on site if problems cannot be solved remotely.

It can be clearly seen that the use of the automated graded greatly increases the numbers of oysters that can be processed per hour. The actual numbers of oysters graded varied with type of seed (e.g. hatchery or FBS seed, wild seed and lantern net seed), with greater numbers of oysters graded when from hatchery of lantern net sources as opposed to wild seed. Also the numbers of oysters processed varied with size. There was a significant improvement of using the automated system when compared to the manual screening performed previously. In addition for hatchery seed without handling, approximately 19 times the amount of 12mm seed were processed per hour when comparing to projected values, indicating that the handling capacity of the system far exceeded expectation. Handling significantly reduced the amount of seed capable to be processed per hour (from 165,429 to 22,316). Also it appears that the type of seed processed is important, as greater amounts of lantern net seed and hatchery seed (unhandled) were processed per hour (165,429 and 69,782 respectively) when compared to wild seed (16,911). In each case, more than double the amount of seed was actually graded per hour when compared to projected values of automation and are much greater than seen in the manual system. In conclusion the new automated system is far more efficient at grading oyster seed and is therefore significantly improving the efficiencies of operation for shellfish farmers.

Irish Premium Oysters are delighted with their investment, ‘Increased production and efficiency will allow us to screen the young oysters more frequently which in turn will produce a higher quality product. The technology offered an immediate impact with an increase in economic and environmental productivity through reduced production costs, an increase in product quality which will ensure the long term sustainability of the company and industry,” says Edward Gallagher MD Irish Premium Oysters.